The Silyns' Vision and Our Current Role

The Silyns' Vision and Our Current Role
Back to news

The Silyns' Vision and Our Current Role 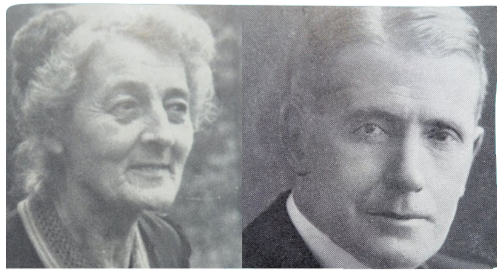 Mary Silyn and Robert Silyn Roberts were innovators in the field of adult education in Wales. They built up a formidable network of WEA (Workers’ Educational Association) activity in north Wales, especially the north-west, during the first half of the twentieth century. Robert - known simply as ‘Silyn’ - was the inaugural Secretary of north Wales WEA (1925-30) and after his premature death his wife Mary furthered the cause in her time at the helm (1930-45).

Their vision was commemorated at an Addysg Oedolion Cymru | Adult Learning Wales event in August 2019 at the Llanrwst National Eisteddfod. There, author Angharad Tomos and members of Theatr Bara Caws provided a compelling description of the pioneering work that Mary Silyn in particular embodied for this burgeoning form of education. She was the first female Secretary of any WEA region in Britain, and would doubtless approve of the fact that women have such senior roles in Welsh education nowadays - from Minister for Education to vice-chancellorships at higher education institutions to being chief executive of Addysg Oedolion Cymru | Adult Learning Wales.

While some advances have been made in the domain of gender equality therefore, the warp and woof of society has changed such that the bedrock of their output was in the education of workers as per the organisation’s name - slate quarrymen, agricultural labourers and the like. We today concentrate more on those who are seeking qualifications while looking for work or who have largely left paid work, though our collaboration with trades unions remains a strong strand of what we are. Yet we continue to meet our learners’ needs with courses tailored to their requirements: that remains a cornerstone of our approach in this century.

What is different now is the low proportion of courses run through the medium of Welsh compared with the Silyns’ time. This is something of which we are very aware and are addressing with an expansion in this component of our work. We take our role in assisting the push to ensuring a million Welsh speakers by 2050 seriously and so are doing much to broaden our scope in this realm, working closely with the Coleg Cymraeg Cenedlaethol and the National Centre for Learning Welsh. The voluntary nature of the network that the Silyns established, based on branches and community, is also different 75 and more years later. But we continue to pride ourselves in using a plethora of community venues at which learners feel at home and secure in their surroundings, and a network of tutors linked to the localities in which they teach.

A final development that the Silyns would be disappointed by is the recent demise of the shooting star in the firmament of Welsh lifelong learning, namely Coleg Harlech. This was an institution that the two of them were involved with in its early days, especially through its summer schools. But the funding and demand for that form of residential education for adults has waned and we consequently have had to adapt to concentrating our efforts on community-based work and offering different styles of education that continue to be relevant.