Jamie's Our Winner!
Back to news 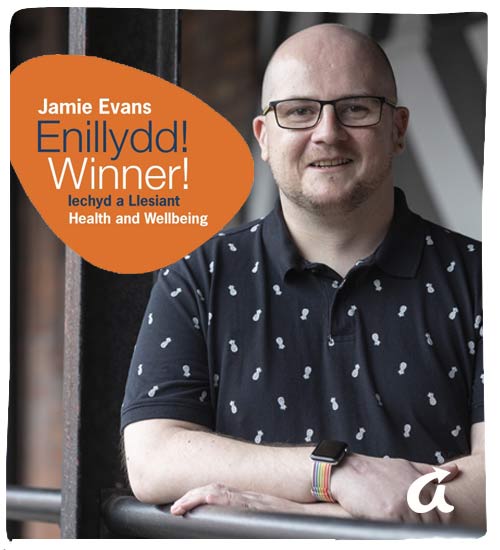 We are delighted to announce that this year's Health and Wellbeing Inspire! Learning Award Winner is our very own Jamie Evans.

Jamie Evans’ depression and anxiety saw him isolate himself from others, to a point where he would go weeks without human contact and was using prescribed drugs to medicate himself from the pain. He said: “I started suffering with anxiety when I was a teenager. I had health problems that were affecting me daily, which meant I was missing school, and that’s where it all began.”

Jamie was diagnosed with Chron’s disease and his anxiety became a huge barrier, stopping him from working, socialising and seeing anyone outside of his home.

“At my lowest, I wouldn’t get out of bed, I wouldn’t wash, I wouldn’t eat. I wouldn’t answer my phone when my family called, and I would make excuses when friends invited me out, so eventually they stopped asking. I had been out of work for 10 years because of my anxiety, depression and my health problems, and I had no aspirations or plans for the future - I was just surviving day to day.

“I had been prescribed painkillers for the pain I was feeling but began relying on them more and more, and I started taking more and more because I was so unhappy. Eventually, when they weren’t enough, I turned to stronger drugs and my problems really started to spiral. I was assigned a peer mentor through my substance misuse support worker.”

There, he was given a leaflet about a 12-week Psychology course with Adult Learning Wales, run in partnership with New Horizons mental health charity, and he signed up.

“On the first day, I stood outside the class for about 20 minutes looking at the door, terrified to go in. My anxiety was though the roof, I felt sick and I almost turned around. But something inside of me had clicked and I forced myself into the class. My first class was amazing. I immediately felt at home and the classes couldn’t come quick enough – I just wanted to learn more.”

When the course was coming to an end, Jamie didn’t feel ready to stop, and enrolled on a Criminology class with the same tutor, despite it being a 40-minute drive away. After a few weeks, he was on a third course in confidence building, sitting three courses a week, before eventually enrolling onto an Access course in humanities and social science at Coleg y Cymoedd.

“I met so many new people and my anxiety just seemed to melt away. I was enjoying myself and had a constant positive feeling inside of me. l felt like I had a purpose in life.”

“I used to have the fear of the unknown, but now going into class, I meet new people and know that everyone is going through their own things and dealing with problems of their own, and no one is judging me. I’ve got so much more out of learning that I ever could have expected. Not just the subject knowledge from the classes, but valuable skills, self-belief, resilience, friendship and better mental health”.

Well done Jamie from all of us at Addysg Oedolion Cymru | Adult Learning Wales - your Inspire Award is truly deserved.

Read more of our real stories here or write your own chapter and join one of our courses today.